View From The Vicarage : November 2014 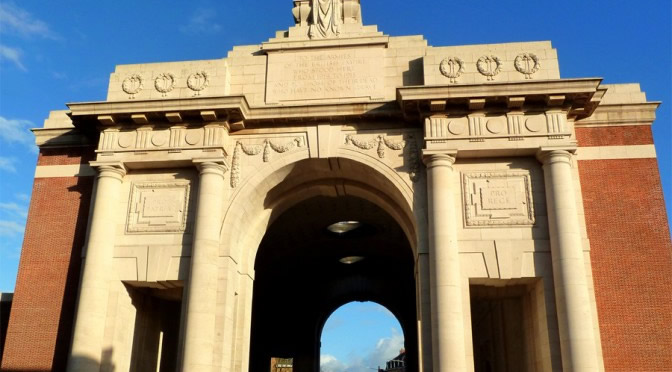 The Menin Gate in Ypres is perhaps the most iconic memorial to the dead of World War One. The panels on the gate record the names of 55,000 British and Commonwealth soldiers who were killed in action and for whom there is no known grave. Since the 11th November 1929 the Last Post has been sounded every night and in all weathers, save for the period of German occupation from 20th May 1940 – 6th September 1944, when it continued to be played at the Brookwood Miltary Cemetery in Surrey. On the evening of 6th September 1944 it was again heard at the Menin Gate in spite of heavy fighting in the town as the Polish army began its liberation.

A few weeks ago I was privileged to be at the Menin Gate to witness my Son Freddie playing the Piper’s Lament after the Last Post. He was there with members of the Combined Cadet Force of Bury Grammar School Boys. It was a most poignant experience as my own great uncles name is on the memorial. The War Diary dated 1914 for the 1st Battalion The Queen’s Own Royal West Kent Regiment records that it marched through the gate by Companies, at spaced intervals, to reduce the possibility casualties incurred as a result of German shelling. One hundred years later members of S 8956 Private Richard’s family saluted and remembered him. Richard was Killed in Action on 23rd April 1915 at Pilkem Ridge just outside the town of Ypres; he was 19 years old.

Keeping Remembrance is and always should be a sombre privilege. We are reminded not only of the ghastly horror of war but also the meaning of sacrifice – a word we bandy about in Churchy circles but which can often seem desperately remote in our own Christian lives. We are also challenged to reflect upon the countless examples of soldiers who, whilst having no religious affiliation or belief, expressed the highest form of Christ like sacrifice in rescuing a dying comrade under intense fire in no man’s land; the same is true today in the lives of our own servicemen and women.

May I thank all those people in the past and those who currently take responsibility for holding high the torch of Remembrance for our war dead in this Church and in our village – We Will Remember Them.