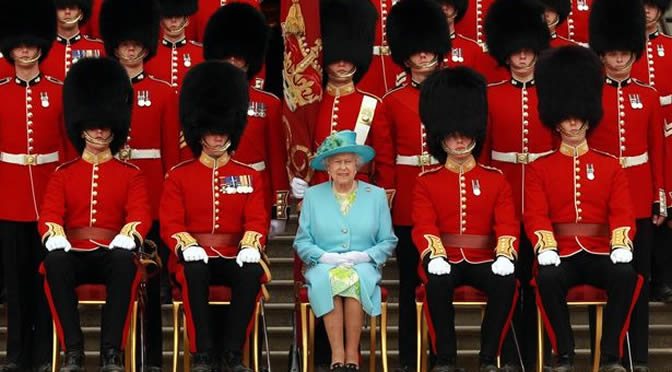 A week or so ago the Evening Standard newspaper in London carried a story about a tourist visiting Windsor Castle. The tourist chose, for reasons best known to himself, to mimic a Guardsman as he marched up and down whilst on duty. The Guardsman showed remarkable restraint in what must be a most tedious and irritating situation that was until the tourist chose to place his hand on the Guardsman’s shoulder. In a split second the Guardsman turned on him and pointing his bayonet affixed to the end of his SA80 assault rifle yelled in his face, “Get back from The Queen’s Guard!” Needless to say the man did exactly as he was told.

It is quite extraordinary that so many people imagine that the Guards are “chocolate soldiers” who simply dress up and march about. They are of course highly trained infantry combat soldiers, many of whom have seen active service most recently in Iraq and Afghanistan. They are also privileged in being  The Queen’s Guard and perform significant ceremonial duties. What is equally bemusing is that tour companies never seem to point this out; the incident in Windsor is one of many in which loyal Guardsmen have just had enough and decide that enough is enough!!!!!

But I suppose that if people are ignorant of their role then they are not entirely at fault – perhaps? The same can be said about the manner in which people treat Church buildings. For some they are sacred spaces of encounter with God whilst for others they are simply old buildings akin to a museum. I once saw a man with a hat on eating ice cream in Bolton Abbey; I was staggered – he didn’t see what the issue was.

It seems to me to be increasingly important that we as “Church” remind people of the nature of our buildings. They are places of prayer, places where the sacraments are celebrated and where the Word of God is proclaimed. We cannot blame people if they have never been told this or assume that they know how to behave when they come into one. It seems to me that as Church we need to be more and more on the front foot reminding people of the significance of our sacred space; and of course that does not mean getting all bolshie and aggressive to make the point.

Whenever I go into Church I say a prayer or make the sign of the Cross or bow to the altar when I go past it. They all make a point particularly to those who may not have been blessed with a Christian upbringing.

As with our Christian vocabulary so with our buildings – we need to talk about them and maybe those who do come across the threshold from time to time might discover that still small voice of calm that is the very voice of God Himself.