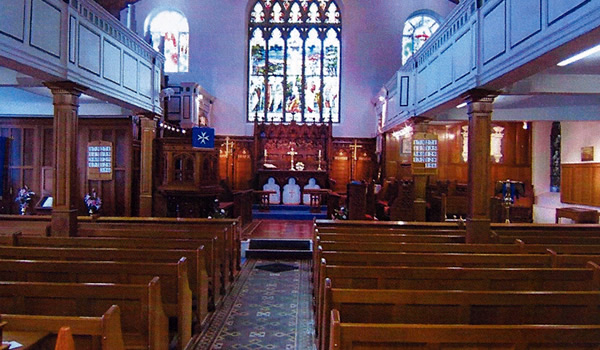 Heaton, Butler and Bayne were possibly one of the most distinguished stained glass firms of the 19th century operating out of Covent Garden, high in the School of Gothic revival, commissioned by many of the principal Victorian architects and whose creative genius adorns, amongst other centres of Christian worship, Wimborne Minster, Peterborough Cathedral and Westminster Abbey. Bayne would often portray himself in many a composition with a long grey beard. The artistic firm were also employed by the Rothwell family of Tottington with the undertaking of designing and installing the East Window in St Anne’s and the one which still shows the scars of war damage in the south east corner. It is likely that they were installed to mark some family anniversary in 1912; the actual reason appears to have been lost in the sands of time. If one looks carefully at the smaller window one can make out the names of their undoubted children in the representation of Jesus, sat with open arms, welcoming the infants that were brought to him. It is more than possible that the actual portraits of the Rothwell children are included in the figures that surround Our Lord. This technique is common and was used in the Sermon on the Mount window upstairs at the north east end; a photograph of the late Mrs Culley, the benefactress, was used to include her as a small child in one of the side panels. As far as the Rothwell family were concerned nothing but the best was expected for God’s house and that has been the continuing approach over many years. We ought to try to give only of our very best to God not simply that which is left over when we have satisfied our own particular interests. The belief that our place of prayer set on holy ground is His house is a constant reminder as to why we maintain it, gather in it, clean and dust and hoover it, and why we insist on a form of worship that aspires to be the very best offering of our mind, bodies, skills and talents.

The East window has been a source of inspiration to countless faithful Christian men and women since 1912. It was the only window to survive intact the Christmas Eve bombing of 1944; though sadly and somewhat ironically, it was damaged by vandalism in the late 1990s. The repair, some of you might recall, was funded by members of the 207th Field Ambulance with whom I was serving with at the time.

As we approach Lent we once again focus on the Passion of Jesus and those events of Holy Week that lie at the very heart of the Faith. The figure of Christ upon The Cross reminds us that his love for us was and is painful and very costly; a cost that can never be repaid. However such thinking should not lead us along a short route to a huge guilt complex and personal feelings of utter inadequacy! Indeed, quite the reverse is the case as the figure of Jesus on The Cross reminds us every time that we look at it of just how much he loves us – that much! I would encourage you all to take time (and perhaps a pair of binoculars) to study the East Window this Lent. Examine the figures and ask yourself the question, I wonder where I would have been at the Cross and of people represented around it with whom do I most associate myself.

With every blessing and as I always say, Keep the Faith!