View from the Vicarage – Oradour 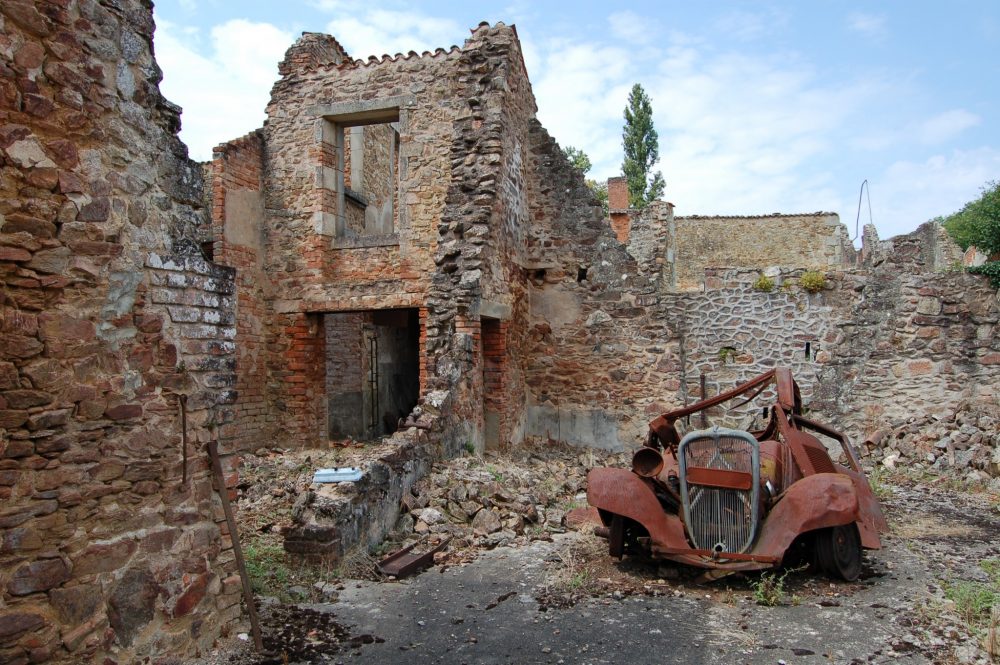 “Down this road, on a summer day in 1944 … The soldiers came. Nobody lives here now. They stayed only a few hours. When they had gone, a community which had lived for a thousand years … was dead.

This is Oradour-sur-Glane, in France. The day the soldiers came, the people were gathered together. The men were taken to garages and barns, the women and children were led down this road … and they were driven … into this church. Here, they heard the firing as their men were shot. Then . . . they were killed too. A few weeks later, many of those who had done the killing were themselves dead, in battle.

They never rebuilt Oradour. Its ruins are a memorial. Its martyrdom stands for thousand upon thousand of other martyrdoms in Poland, in Russia, in Burma, China, in a World at War.

At the village of Oradour-sur-Glane, the day the soldiers came, they killed more than six hundred men, women … and children. Remember.”

These words were read by Sir Laurence Oliver in the 1970’s series The World at War. Oradour is quite close to our home in France and is a place that I am very familiar with; it remains in ruins alongsode the rebuilt new Oradour.

At the end of the Second World War no one was held to account as the vast majority of the perpertrators were in East Germany and behind the Iron Curtain. On 12 January 1953, a military tribunal in Bordeaux heard the charges against the surviving 65 of the 200 or so SS men who had been involved. Some of these men were French nationals from Alsace who had been forced to join the SS. For complex reasons of national unity an amesty was granted and to this very day not a single person has been held accountable.

A sense of profound injustice still permeates the psyche of many French in the region of Limousin.
War is deeply unjust; in our own time and in these very days in places such as Allepo the most shocking things are happening to civilians of all ages – images from which many turn away. Souviens – Tois are the words on an old board as you walk into Oradour – Sur – Glane. Remeber them but not just those who have perished years ago but those who have today, in this hour, in this moment in the time it has taken you to read this.