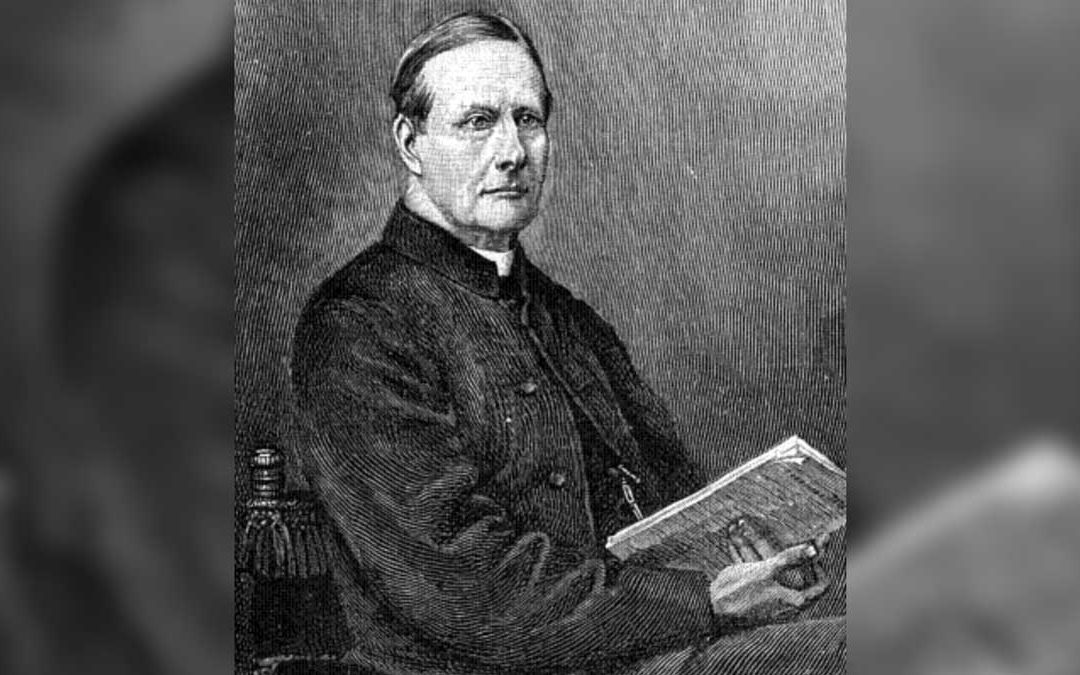 Onward Christian soldiers,
marching as to war,
with the cross of Jesus,
going on before.

Sabine Baring-Gould was an Anglican priest, hagiographer, antiquarian, novelist, folk song collector and eclectic scholar. He was born at St Sidwell in Exeter in 1834 and died in 1924 at Lew Trenchard in Devon aged 89.

The Gould family was descended from John Gould who fought in the crusades at the siege of Damietta in 1217, who for his valour was granted in 1220 by Ralph de Vallibus an estate at Seaborough in Somerset. Sabine led a nomadic life as a young boy travelling around Europe with his parents, being taught by private tutors. He only spent two years in formal schooling at King’s College School in London, and Kings School in Warwick. His time there was ended by a bronchial disease of the kind that plagued him throughout his long life. His father considered his ill-health a good reason for another European tour!

Sabine graduated from Clare College Cambridge with a Master of Arts degree in 1860. He took holy orders in 1864 at the age of 30 and became the curate at Horbury Bridge in the West Riding of Yorkshire. It was there that he met Grace Taylor, the daughter of a mill hand, then aged 14. In the next few years they fell in love. His vicar, John Sharp, arranged for Grace to live for two years with relatives in York to learn middle-class manners. He and Grace were married in 1868 at Wakefield. Their marriage lasted until her death 48 years later, and the couple had 15 children, all but one of whom lived to adulthood. When he buried his wife in 1916 he had carved on her tombstone the Latin motto Dimidium Animae Meae (Half my Soul).

Sabine became rector of East Mersea in Essex in 1871 and spent ten years there. On the death of his father in 1872 he inherited the 3,000 acre family estates of Lewtrenchard in Devon. Dartmoor became his passion and many of the prehistoric preserved sites of stone circles are due to his research.

Onward Christian soldiers was written in 1865 apparently in less than fifteen minutes. and was used as a processional hymn for children at Whitsuntide. The hymn was famously chosen by Winston Churchill at a church service held on board the battleship HMS Prince of Wales in August 1941, attended by President Franklin Roosevelt following their agreement on the Atlantic charter. Churchill made a radio broadcast explaining his choice of hymn and it’s significance in the fight for freedom.