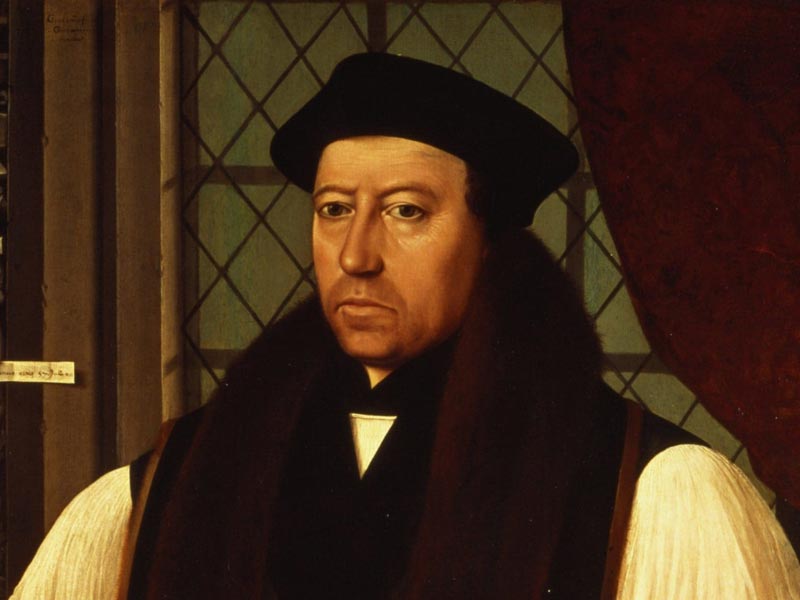 If you have a spare moment in church before a service your gaze may have alighted on occasions upon the very first page of the Green Order of Service booklet. The page contains an extract from the preface to the ‘Declaration of Assent’ which is made by Deacons, Priests, Bishops, Readers and Lay Workers of the Church of England when they are ordained or admitted and licenced, and on each occasion when they take up a new appointment.

The Preface contains reference to both the ‘Thirty-Nine Articles of Religion’ and the ‘Book of Common Prayer’ and to what is termed the ‘Ordering of Bishops, Priests and Deacons’. On the 21st of March the Church of England marks the death of the man who was the chief architect of the momentous religious change this country underwent during the reigns of Henry VIII and Edward VI – Thomas Cranmer. Cranmer is generally considered to have formulated two editions of the Book of Common Prayer in 1549 and 1552, the Ordinal in 1550 and the original version of what later became known as the Thirty-Nine Articles.

Born in Nottinghamshire in 1489, at the age of fourteen he was sent to the then newly created Jesus College Cambridge. Whilst at Cambridge he began studying theology and by 1520 he had been ordained. After an apparently unspectacular academic career he was recruited into the diplomatic service in 1527 and thereafter was given a role by Cardinal Wolsey in assisting with the annulment of the marriage of Henry VIII and Catherine of Aragon. As part of his diplomatic work he met several continental ‘reformers’ and began to be influenced by the works of Huldrych Zwingli and others.

He was made Archbishop of Canterbury in 1533 and pronounced Henry’s marriage to Catherine of Aragon annulled. He was by then a committed Church reformer. Unlike others he survived Henry’s unpredictable final years. Cranmer mourned Henry’s death in January 1547 and it was later said that he demonstrated his grief by growing a beard. The beard was also a sign of his break with the past. Many continental reformers grew beards to mark their rejection of the old Church and this significance of clerical beards was well understood in England.

Following Edward’s death in 1553 and the succession to the throne of Queen Mary, Cranmer was convicted of treason and heresy. Demoralized by imprisonment he signed six recantations but was still condemned to death. He was burnt at the stake in Oxford on the 21st of March 1556. He is generally considered to have a genius for formal prose and undoubtedly left a lasting mark on Anglican liturgy.