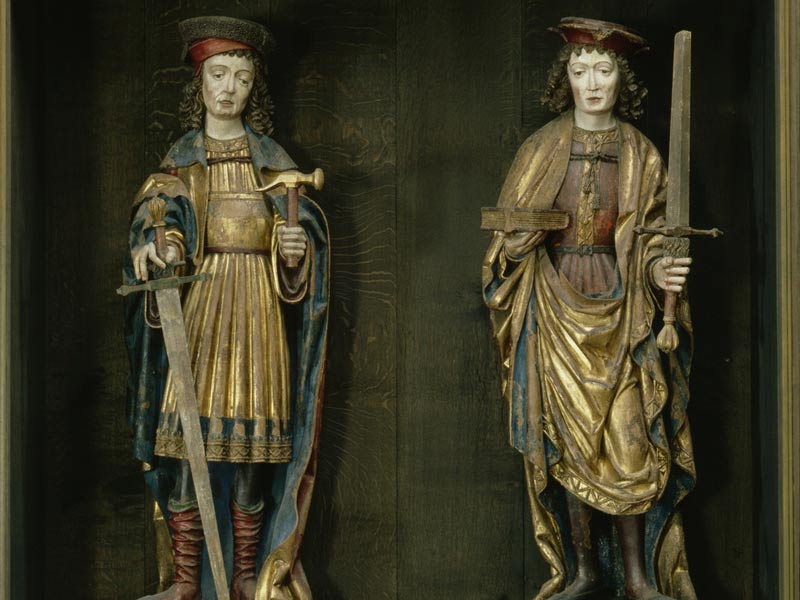 We few, we happy few, we band of brothers; For he today that sheds his blood with me, Shall be my brother; be he ne’er so vile, This day shall gentle his condition;
And gentlemen in England now a-bed shall think themselves accurs’d they were not here,
And hold their manhood’s cheap while any speaks, that fought with us upon Saint Crispin’s day.

This St Crispin’s Day speech is from Shakespeare’s history play Henry V. On the eve of the battle of Agincourt, which fell on Saint Crispin’s Day, Henry urges his men into battle, one of whom was my ancestor Sir Thomas Strickland, esquire to Henry V.

Thomas was given the honour of carrying the English flag (Cross of St. George) into battle, vastly outnumbered by the French. Today, for those of us who have seen the 1944 film by Laurence Olivier to raise British spirits during the Second World War, and by Kenneth Branagh in the 1989 film may wonder who these two saints were Crispin and Crispinian, Martyred at Rome, circ.287AD.

Born to a noble Roman family in the 3rd century AD, Crispin and Crispinian fled persecution for their faith, ending up at Soissons, where they preached Christianity to the Gaul’s (modern France) whilst making shoes by night. They earned enough by their trade to support themselves and to aid the poor. Their success attracted the anger of Rictus Varus, governor of Belgic Gaul (France), who had them tortured and thrown into the river with millstones around their necks. Though they survived, they were beheaded by the Emperor Diocletian. The date of their execution is given as 25 October 285 or 286.

The feast day of Saints Crispin and Crispinian is 25 October. Although this feast was removed from the Roman Catholic Church’s universal liturgical calendar following the Second Vatican Council (1962-1965), the two saints are still commemorated on that day in the most recent edition of the Roman Church’s martyrology and also after the ninth Lambeth Conference, held in 1958, clarified the commemoration of Saints and Heroes of the Christian Church in the Anglican Communion. In the sixth century a stately basilica was erected at Soissons over their graves, and St. Eligius, a famous goldsmith, made a costly shrine for the head of St. Crispinian. They are the patron saints of cobblers, glove makers, lace makers, lace workers, leather workers, saddle makers, saddlers, shoemakers, tanners, and weavers.

So, if you’re knitting and you drop a stitch, or repairing that favourite pair of shoes, say a little prayer to both saints Crispin and Crispinian.