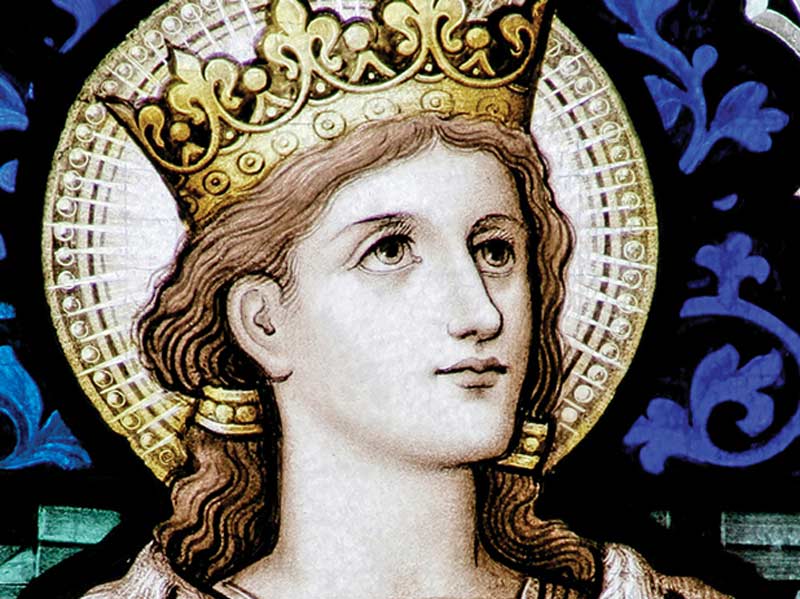 Saint Margaret of Scotland (c. 1045-1093, Feast Day 16th November), also known as Margaret of Wessex, was an English princess and a Scottish queen. Margaret was sometimes called ‘The Pearl of Scotland’. Born in exile in the Kingdom of Hungary, she was the sister of Edgar Ætheling, the shortly reigned and uncrowned Anglo-Saxon King of England. Margaret and her family returned to the Kingdom of England in 1057 but fled to the Kingdom of Scotland following the Norman conquest of England in 1066. By the end of 1070, Margaret had married King Malcolm III of Scotland, becoming Queen of Scots. She was a very pious Roman Catholic, and among many charitable works she established a ferry across the Firth of Forth in Scotland for pilgrims travelling to St Andrews in Fife, which gave the towns of South Queensferry and North Queensferry their names.

The chroniclers all agree in depicting Queen Margaret as a strong, pure, noble character, who had very great influence over her husband, and through him over Scottish history, especially in its ecclesiastical aspects. Her religion, which was genuine and intense, was of the newest Roman style; and to her are attributed several reforms by which the Church in Scotland was considerably modified from an insular and primitive type. Among those expressly mentioned are a change in the manner of observing Lent, which thenceforward began, as elsewhere, on Ash Wednesday and not as previously on the following Monday, and the abolition of the old practice of observing Saturday (Sabbath), not Sunday, as the day of rest from labour.

She attended to charitable works, serving orphans and the poor every day before she ate, and washing the feet of the poor in imitation of Christ. She rose at midnight every night to attend the liturgy. She successfully invited the Benedictine Order to establish a monastery in Dunfermline, Fife in 1072.
Margaret and Malcolm had six sons and two daughters, Margaret was the mother of three Kings of Scotland, or four, if Edmund of Scotland (who ruled with his uncle, Donald III) is counted. Her daughter, originally christened Edith is remembered as Matilda, and was queen consort of England. She married Henry I king of England (1068 –1135) the fourth and youngest son of William the Conqueror.

When my five times great grandparents’ married in 1777, (Margaret Preston and John Casson), Margaret was a lady of distinguished birth. She could claim a clear decent from King Edward III (reigned 1327-1377) and consequently even to William the Conqueror including his son Henry I and his wife Matilda (Edith) and thus I am a descendant of Saint Margaret of Scotland.