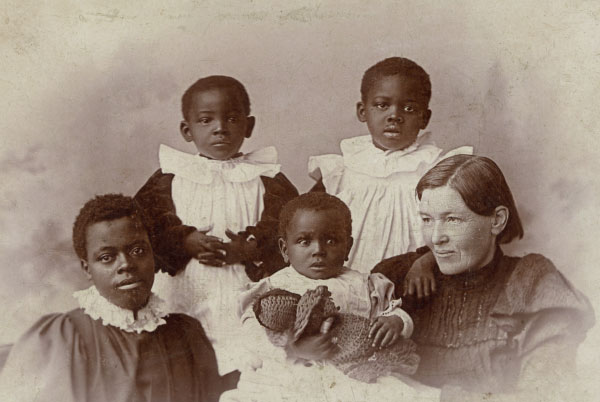 Mary Slessor was born on 2 December 1848 to a poor working-class family, in the slums of Dundee. Mary’s father and two brothers died of pneumonia, leaving behind only Mary, her mother, and two sisters. By age fourteen, Mary had become a skilled jute worker, working from 6am to 6pm with just an hour for breakfast and lunch.

Mary was 27 when she heard that David Livingstone the famous missionary and explorer, had died and decided she wanted to follow in his footsteps.
Arriving in Duke Town a district in Calabar, a port city in Nigeria, in 1876, Mary set to work quickly teaching the children and working in the dispensary. She learnt the local language, Efik, so that she could communicate with the local people. With red hair, blue eyes and a strong Dundonian accent, she would have stood out among the other missionary workers.

She soon began to adapt to the new environment, abandoning some of the Victorian dress unsuited to active work in a hot climate and cutting her hair short. She also ate the local food.

Mary wanted to move inland to places where life was simpler but was told this was not safe for a woman on her own. However she eventually got her own way and spent the rest of her life there. She eventually won the trust of local people as she lived with them, learning about their lives and helping them. She was gradually asked to mediate in disputes and resolve issues.

Working tirelessly she tried to improve the lives of women and children, sometimes putting her own life at risk in dealing with highly charged confrontations with chiefs, other local leaders and witch doctors.One of the most harrowing customs that Mary encountered was in relation to the birth of twins. When twins were born, it was believed that one of them was the child of the devil and since it wasn’t known which twin this was, they both had to be killed. The mothers were then banished from their community with no means of support. The rescuing, protection and raising of surviving and abandoned twins and their mothers became one of Mary’s key roles in her work, as well as working to change the culture and beliefs in relation to twins.

Mary adopted some of the abandoned twins as her own. Missionaries were not encouraged by the mission societies who employed them to adopt them into their own family. Mary ignored this rule and is known to have adopted nine rescued children.

Mary Slessor died on the 13th of January 1915 and was given the Colonial equivalent of a State Funeral in Duke Town.