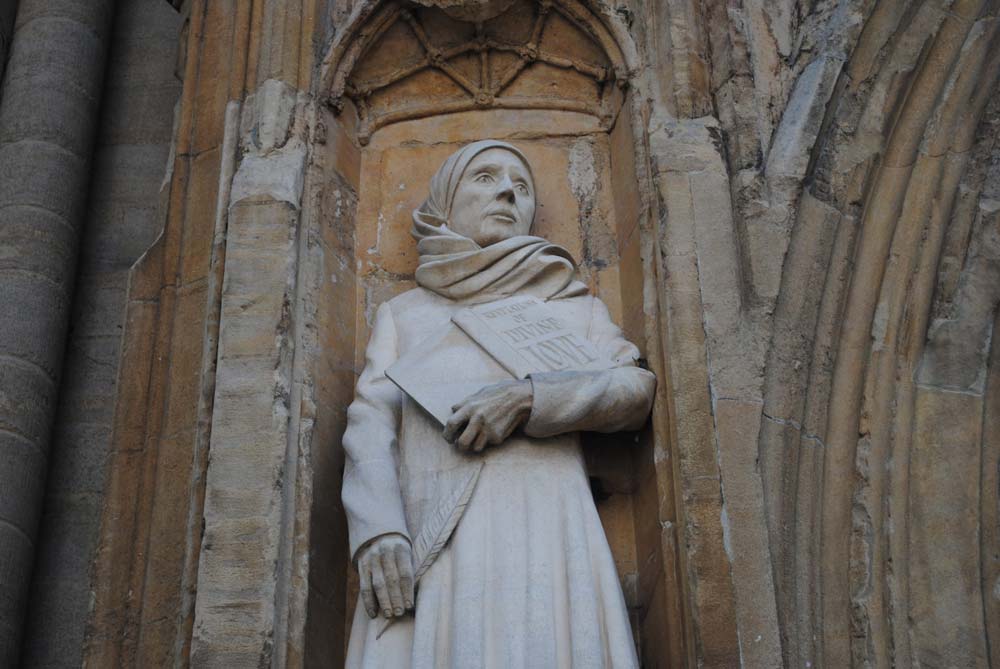 The Saint of the Month for May, I thought, should be Julian of Norwich. There were several that I could have written about but with our recent situation I thought she would be perhaps someone we could identify with. The words that on reading struck me were these:

For much of her life, Julian lived in permanent seclusion as an anchoress in her cell, which was attached to St Julian’s Church, Norwich. Her cell would only be about 12 square feet. Not very big is it?

Recently, we have all certainly experienced some sort of seclusion and for many of our oldest friends this has been more so. For those who live on their own and/or of a certain age not being able to have personal contact with family and friends must seem like an eternity.

This is the time when we can feel God’s presence so much more if we are open to receiving him.

The 8th May is the Feast day of Julian of Norwich, she was born in 1342 but nothing is known of her early life, or her real name, nor of her date of death, but it is estimated around 1420.

Julian is the first writer in English who can be identified with certainty as a woman. She was at the point of death when she received a series of fifteen ‘showings’ or revelations from God, beginning when her parish priest held up a crucifix before her and she saw blood trickling down Christ’s face. These ‘showings’ lasted for several hours. A sixteenth came on the following night and was conclusion and confirmation to the entire sequence. Julian later put these into writing. She says in her writing that these revelations were ‘shown to a simple, uneducated creature in the year of Our Lord 1373 on the eighth day of May’, when she was thirty and a half years old. Later, in order to achieve greater spiritual perfection she adopted a fully religious mode of life becoming not a nun but an anchorite. Julian entered into a solitary life at St Julian’s Church Norwich, from where she took her name. Although, as an anchoress she lived in solitude we do know that she was also a spiritual counsellor. She is mentioned in the book of Margery Kempe. Margery describes

how she visited an anchoress in 1415 who was called Dame Julian where she receives advice in relation to her visions.

Living in a time when the people of Norwich suffered from plague, poverty and famine she must have counselled many who suffered pain. Yet her writings are full of hope and trust in God’s goodness.