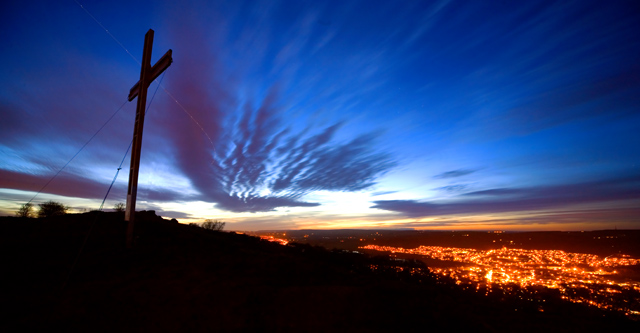 This year these will include the liturgy of the Washing of Feet on Maundy Thursday and the Dawn Service on Easter Day. At the outset I have to say that no Christian denomination is the sole conduit through which public worship is offered for the worship God. Both of the services that will take place have their foundation in Holy Scripture and are commonly practiced throughout the worldwide Church. Some explanation and background though might be helpful.

The Washing of Feet on Maundy Thursday follows Jesus’ command (latin. Mandatum from which we derive the word Maundy) in the Farewell Discourses’ recorded in the Gospel according to St John, chapter 13 verse 14. We therefore follow a simple command that the Church should imitate Jesus’ humility. It is both received in humility and administered in humility. Those twelve people who have agreed to be part of the liturgy that will take place following the intercessions during Holy Communion are offering a collective, visible prayer on behalf of the Church that reminds everyone that she is called to holy service in the world. During the act itself the hymns, “I the Lord of Sea and Sky, Brother let me be your Servant and Lord Christ who on thy heart didst bear” will be sung. When it is finished we move to Holy Communion and then onto the Gospel Watch.

The Dawn Service will occur at 0517 am on Easter Day and ties in again with the Gospel accounts of the holy women going to the tomb early in the day. The Church is in darkness and a brazier is lit outside. The congregation gather outside at the west door each carrying an unlit candle. The Vicar, Deacon and Server process in silence to the west door without passing through the building. The unlit Easter candle is carried by the deacon. The Vicar blesses the Easter candle lights it with the taper and then reads the Holy Gospel. The procession, followed by the congregation, moves inside and pauses at the top of the aisle and versicles and responses are both said and sung. The candles of the congregation are lit from the Easter candle and we move through Church towards the East end. The vicar lights a taper from the Easter candle and proceeds to light the candles on the altar. The clergy procession then depart singing verse 1 of ‘Thine be the glory’. The server and vicar return to the vestry. The deacon then leads to congregation to the village hall for hot cross buns and a tea or coffee.

Liturgy is not entertainment and these additional services are intended as a prayerful way to engage with our Easter celebrations. I am immensely grateful to Richard Moffatt and Ken Bayliss for their enthusiasm in creating two very meaningful and helpful services of devotion.