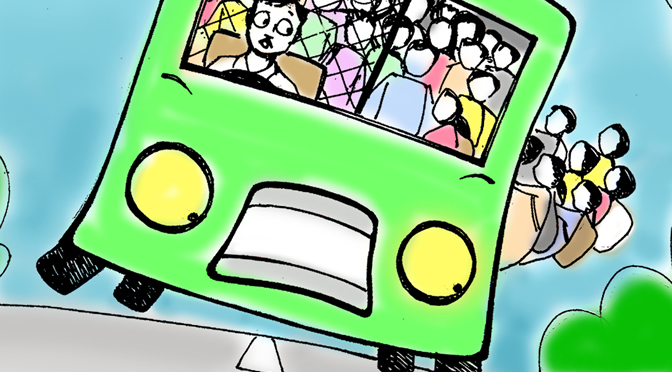 ‘Some enchanted evening‘ goes the song – and so it was on the lovely, sunny and balmy evening of June 16th , when a large group of MU members boarded a coach, in Laurel Street for an evening drive and supper.

The coach driver introduced himself as Norman and informed us that we were not going anywhere by motorway, but travelling by a scenic route to our destination – the Aspinall Arms at Mitton.

WE drove via Haslingden to the outskirts of Blackburn, enjoying views of moorland, with lambs, foals and calves frisking in the evening sunshine. There were also plenty of rabbits in the grass verges alongside leafy lanes, completely ignoring the traffic passing nearby.

The coach turned down a narrow lane – and was stopped by a passing motorist, who advised the driver that our vehicle was too large to get through this particular road! Whereupon Norman backed the coach to a tiny lane entrance, and completed a successful three point turn – to the applause of his passengers. One lady remarked, “I wouldn’t have liked to do that in a car – let alone a coach!!”

This adventure over, the coach drove on to Mitton and the Aspinall Arms, to arrive at the pre-arranged time. For many of the ladies this was a first time visit, although Marion & Elsie had made several expeditions to try it out for suitability.

All the group followed the clearly signed route to the bar, where we were directed to several seating areas prepared for us, in groups of fours, fives, and sixes. Each area was furnished with wooden tables and chairs, wooden panelling on the walls, many pictures of interesting scenes, flowers and people and some rooms had a feature old-fashioned fireplace – unlit on this warm evening.

Once seated, the ladies organised drinks from the bar before meals were served. Marion and Elsie had lists -in TRIPLICATE!! – to ensure that each got the meal they had ordered and not someone else’s. THe food was delicious and of very generous portions. Indeed some couldn’t manage all their chosen dessert.

Afterwards some explored the rest of the hostelry and gardens – discovered another group of M.U. members, having a similar night out, from Burnley.

The coach brought the group by a much shorter route back to Laurel Street, Tottington, where we all agreed it had been a good night out.