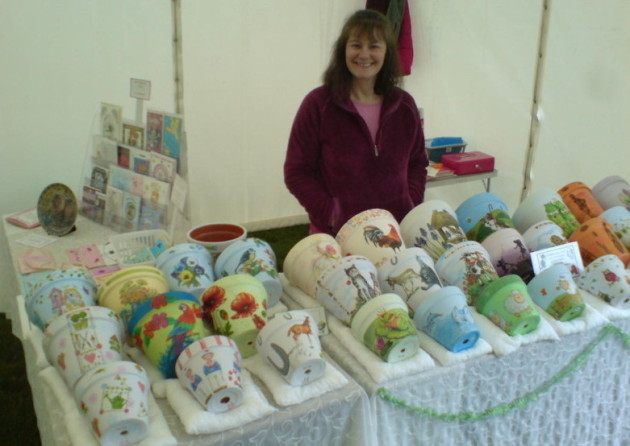 A bright display greeted M.U. members arriving for the February meeting, arranged by the speaker, Mrs. Yvonne Pinder, who was to talk about her pots. But first Bridget conducted a short service.

She was followed by Margaret, our Branch Leader, covering the business of the meeting, with news of members and important notices. She spoke of the forthcoming A.G.M., in March, when there would not be the usual potato pie supper, as many members found eating late a problem. Then suggested projects for “Make a Mother’s Day” were discussed, giving the cost of each project. It was agreed that the Committee should have the final say, after it was known how much money was raised by the collection during the evening.

The proposed making of bunches of flowers for Mothering Sunday was announced, with anyone with spare time invited to meet on Saturday 10th March , at 10am in the Hall, and to bring any greenery that they had available.

Then Yvonne Pinder was introduced, telling us about her company, named ‘Pinny’s Pots‘. Firstly she told how it all began. She worked for Burnley Building Society, but after the workforce was reduced, travelled to Bradford daily, by train, intending to do this for about three years, but went on for 27 years! During that time she joined the Territorial Army in Burnley and met her future husband, but left in 2003.

She had always been interested in crafts and started to have a stall at Craft Fairs, selling her creations. Then she took early retirement with her husband. They bought a motorhome and toured America, which they enjoyed greatly, but came back wit no jobs, no money, and no car. Her husband bought a banjo and began work in a music shop in Huddersfield. He travels there daily.

Yvonne started to do more Craft Fairs, producing the pots for which her company is named. She uses Italian terracotta pots as they are a particular weight and texture, painting hem with acrylic paints, often giving them several coats. When they are dry they are over-painted, sometimes freehand, but more often using napkins. She had many napkins in three or four ply and different sizes. She cuts out intricate designs – having loved cutting out since the age of 5 – and demonstrated how to apply them to the pots. Then the pots are varnished and left to dry.

Yvonne answered various questions about techniques before inviting people to come to look closely at her work, and to buy them if they wished. Everyone then enjoyed tea and biscuits and a chat before going home.