On October 21st the Mothers’ Union held their annual Open Evening. Despite a howling gale and heavy showers outside, inside it was bright,warm and cheerful. We welcomed eighteen visitors from St. Hilda’s Union of Catholic Mothers, and several husbands accompanied their wives to the evening entertainment.

The Mothers’ Union Committee had prepared a meal for eighty guests, with a main course of eiher Quiche Lorraine, or Broccoli Quiche, served with sald and new potatoes. This was followed by Fresh Fruit Salad with ice cream and a Shortbread, with a cup of tea.

After the crockery and cutlery were cleared away our entertainer, Mike Hammer, arrived. 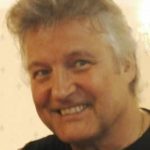 Mike Hammer of Herman’s Hermits was our guest

Mike was a former lead guitarist for several groups, including Herman’s Hermits, and he has also acted as a Children’s Television Presenter and is an author of a series of popular children’s books.

He began his talk by explaining how he became interested in playing the guitar. He had been taken to see the Australian yodeller, Frank Ifield, and after hearing him sing the song, with yodelling, “I remember you”, he decided on the spot that that was what he wanted to do when he grew up.

Mike sang songs from many decades, interspersing he songs with humorous tales about working with various acts – and in other parts of the world. He was waiting overnight in a hotel room for a connecting flight from South Africa and, feeling bore, started to write stories about his own cat and dog. He also illustrated them. They were later published. He gave us an example of his illustrations – while playing the guitar, and singing, he drew a picture which was easily identifiable as Charlie Chaplin – and likened this skill as equivalent to ‘patting your head and rubbing your stomach at the same time’.

Mike played a modern version of a ukelele, while reminiscing about the late George Harrison and Joe Brown. He kept all the audience, ranging in age from 11 to 94, suitably entertained.

He thanked Mrs. Margaret Whittaker for arranging his visit and was thanked by Marion for his performance.