The meeting for September was held on the 16th when our speaker was Mr. Gordon Bartley from Southport. Mr. Bartley has had a long association with the Aviation Industry, working at B.A. Systems at Warton in Lancashire, qualifying afterwards as a Civil Aviation Photographer and finally spending 10 years as a guide on the Concorde Airliner, based at Manchester Airport. 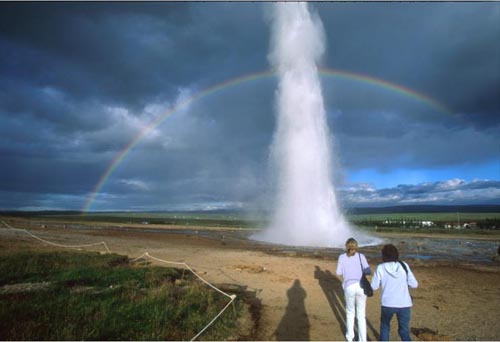 After a brief history of the island, including its discovery by the Vikings, led by a man called Armasson in the 8th century, he led us through the centuries to the second world war, membership of NATO, its problems with whaling and brought us up to date by talking about its chemical, fertiliser, fishing and tourism industries, which generate a lot of its wealth.

Mr. Bartley showed us many colour slides of the highest quality, depicting views of geysers, hot mud pools and glaciers. His tour was mostly of the southwest corner of the island, in areas around Reykjavik. There were photos of 8th century grassed roofed tiny cottages through to modern buildings, including a spectacular cathedral, built from reinforced concrete.

Many spectacular photographs were froma hill in Reykjavik, to the north, south, east and west of the capital, showing people swimming in pools in pools with steam rising from them; steel monuments and visitors enjoying walks on the glacier.

At the end of the talk I’m sure many of us rather liked the idea of visiting Iceland. It was a superb talk.

Mr. Bartley was thanked for a most enjoyable evening by Rita King.