It was decided to make the November 18th meeting of the Mothers’ Union another ‘Open’ evening, because the speaker was to be the Vicar, and the subject of his talk ‘The Royal Chaplains of World War One’, therefore several husbands and members of the congregation,added to members, made the event ‘A full House’.

Bridget began the meeting with prayers and a reading of a poem by the Reverend G.A. Studdert-Kennedy, otherwise known as ‘Woodbine Willie’.

Hugh gave a brief introduction to his talk by referring to the fact that five members of his family fought in the First World War, in different regiments, some subsequently wounded or killed.
His presentation and talk were based on the research he had done for two volumes of a book given to the Queen – the first in 2012, on the occasion of the Diamond Jubilee, and the second earlier this year. 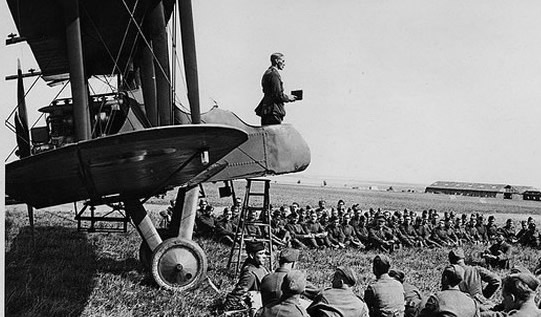 Hugh said that 5,000 clergymen served in World War One, of whom forty became Royal Chaplains to Kings and the Queen.

As a general background to his talk Hugh explained that 8.7 million servicemen went to fight in the war, of whom 80% returned, although many were seriously injured. Before showing pictures of those who were, or became, Royal Chaplains, Hugh spoke of the difficulties of the Job – there were no uniforms initially, and no guidelines as to what their duties would entail. Some Chaplains were disciplined because they tended to persons of other faiths or of no faith.

Many of the Chaplains were awarded multiple medals for bravery and outstanding courage, Victoria Cross, Military Cross, Distinguished Service Order etc. and many were ‘Mentioned in Despatches’ several times, often because they had gone, unarmed, into’no man’s land’, to rescue the injured, saving many lives. Pictures of some medals more generally issued were known as Pip, Squeak and Wilfred – given for Victory, Campaign and for having fought at Mons.

Many scenes were shown of Chaplains serving in te trenches, the camaraderie and trust established by them, in dire conditions, in Field Hospitals alongside doctors and nurses ministering to the wounded.

Hugh spoke of some notable Chaplains who went on to become Bishops, or church officials on their return to civilian life. He mentioned the contributions of others who became famous in other fields -“Woodbine Willie”, who had given such comfort on the battlefields by giving a cigarette – Earl Hig, known as the butcher of the Somme, who lay in state in both Edinburgh and London, for thousands to pay their respects. He spoke of the trauma suffered by many having endured the stress of battle and caring for the dying on a multiple times daily basis.

Hugh was thanked by Chris Jupp, the only male member of the branch, for the excellence of the presentation, for his enthusiastic commentary and the fact that we had all learned so much, not only of Chaplains’ duties, but of their outstanding bravery and courage.

Hugh , and Alison who assisted him, were thanked by Marion, Branch Leader, who gave him a special gift of cufflinks, made from World War One Shrapnel, from the Mothers’ Union, to commemorate the 25 years since Hugh’s Ordination.