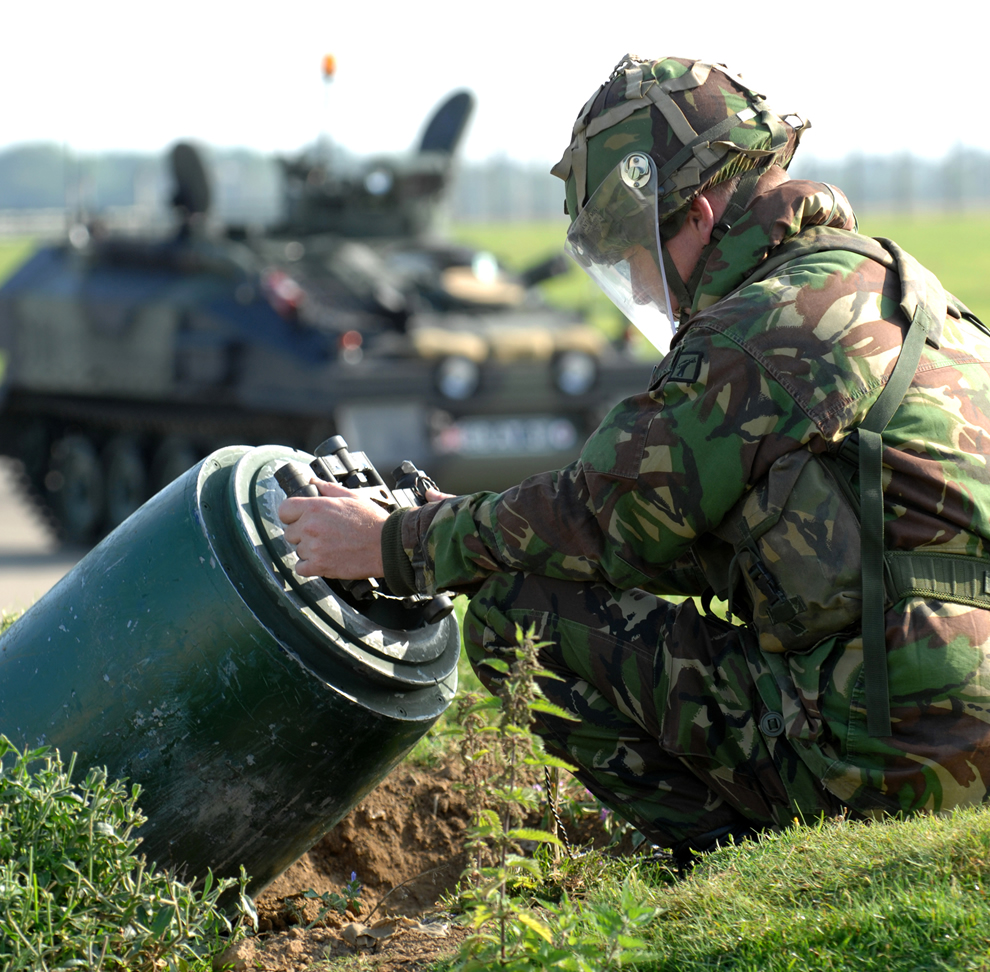 It was another miserable wet evening , just as our previous meeting, but nevertheless a good number of ladies came and the room filled up to hear Mr. Gordon Walker talk about ‘Bomb Disposal’.

This was his third visit, but the topic this time was quite a contrast to the last one, which was a talk about ‘Dickens Humour’.
Mr. Walker himself was now dressed in his smart blazer, wih the special badge of the bomb disposal unit on the pocket. Also it was admirable that he had come, for he had left hospital after a cancer operation that very morning. He was determined to keep this engagement.

The talk itself was fascinating. This was an account of Mr. Walker’s life in the army. He started with a joke, following his favourite comedian, Dave Allen. [The joke concerned a nun, a cup and a gin and tonic!]

Then followed the serious part of the evening. There were 450 soldiers killed in Afghanistan -and of these one third were bomb disposal personnel. The last death was of a 26 year old female. On that day she had defused six bombs, but the seventh killed her. In his time Mr. Walker said, tackling two bombs per day was the limit, because of the stress involved.

He joined the army aged twenty one – older than the National servicemen who enlisted at eighteen years old, after completing a Ph.D degree. He said that he had ginger hair and a baby face, both of which singled him out for bullying. He was also immature, but over the first two weeks of training he grew up. For there was endemic cruelty and bullying [what changes?] by Officers from the upper classes towards soldiers from the working class. Because of his qualification he was eventually offered a commission, but this was refused. He found later that this was because his father was a coal miner. However he was offered the job of ‘ammunition examiner’.

During this training officers and men worked well together and at the end of training he was promoted to ‘corporal’ . The officers became ‘captain’.

Then he was posted to Selby in Yorkshire, with the task of clearing the moors of bombs dropped in the second world war. Doing this of course, one must trust the people you work with. There were three main jobs:- The first was to examine ammunition, and to check that it was stored safely. The second was to attend accidents caused by ammunition and find what caused the accident. Thirdly was to demolish the firing ranges on the moors with the bombs.

During this time he and his colleagues carried out 286 demolitions. If the police found any ammunition the police were to be told.

This was all serious work, but the speaker related some of the funny incidents that happened. One such story was of an old lady from Goole, whose husband had just died. She lived in an Alms House, and in her sitting room the police found a 25lb shell standing at each side of her mantelpiece, full of explosives, and the ladfy had polished these shells regularly for years! Six hand grenades were found in another room and even more were buried in the garden! All lethal! The whole lot were taken to a nearby school playing field, buried in a hole and detonated safely.

At the end of his talk, Margaret Whittaker thanked Mr. Walker, both for his interesting talk and making the effort to come.He gave a lot of details of his job and was rightly proud of the work he had done.