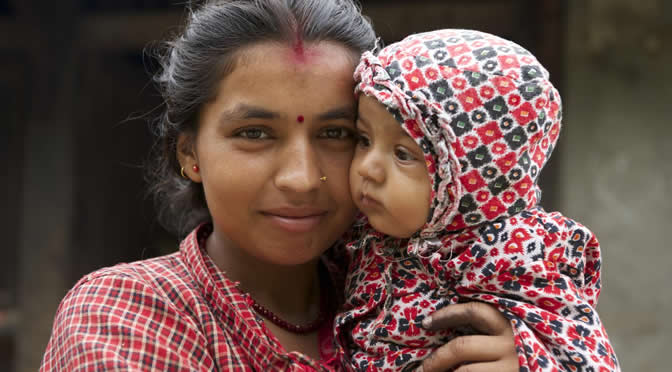 After a service led by Bridget, in the Parish Hall, and announcements given by Branch Leader Marion, the Treasurer spoke concerning the collection for ‘Make a Mother’s Day’.  £230 had been given, which was to support :- Standing up for mums; Lifeline of support in the U.K. and Northern Ireland; Opportunity of a lifetime – helping people to learn to read; Advice & training; Raise them up – helping by guidance.

Then the speaker for the evening, Mrs. Maureen Hawksworth, was introduced by Marion.

Mrs. Hawksworth and her husband had worked abroad as missionaries in Nepal. They had first visited Nepal when their daughter, a Doctor, was working at the Leprosy Mission. They found the country very poor, with few facilities, very bad roads, no running water in the homes – only standpipes in the streets of towns – and poor sanitation.

They were approached in 2001 for her husband to use his experience as a banker/financial adviser to help with the administration of a £1,000,000 budget, to ensure that it was used wisely. Mrs. Hawksworth wanted to help the women and make a difference in their lives.

Firstly they needed to obtain Visas and then Sponsors for their trip. They were sponsored by the Methodist Church of which thry are members. They had to attend a college for a term – to prepare, learn a little of the language and a different culture. By the end of 2001 they were ready to fly to Katmandu.

Nepal had been a Hindu kingdom, but the King had stepped down, so it was no longer a kingdom. The population is largely rural, with 85% in rural communities and only 15% in towns. The country is divided into 70 districts, but more than 20 of these don’t have a road. The land is fertile on the low and middle land, growing seasonal fruit and vegetables. Only Sherpas live in the high Himalayas. Everything is carried on backs – including furniture and animal feeds.

It is not necessary to go to school, although education is free if you can afford the uniform, books and pencils. Mostly the education is by rote. Most villages have a school, but families send boys to school, girls child mind! Girls often marry very young and become the proprty of their husband’s family. They are considered unclean when about to give birth and go out into the fields to do this alone.

More are going into hospitals in towns, where there are at least basic facilities. If a boy is born it is celebrated, but girls are ignored. Marriages are still arranged, even for men in their late twenties. Men can take a second wife, especially if the first hasn’t produced a son, this is often a sister of the first wife.

95% of Nepali women suffer some form of abuse – it is always the woman’s fault – she has brought bad luck to the family. Women can only wear red when they are married – if they are widowed they can never wear red again. It is very rare for widows to remarry – they are considered used goods.

A ten year civil war left many women alone, either widowed or deserted, with no means of support. In 2005 , Mrs. Hawksworth went to help set up a jewellery project, teaching the women how to make saleable goods, to support themselves and their children. This was successful, so in 2007, she was asked to start another project, ‘Emmanuel Crafts’.

This starts each day at 9.30am, with 30 minutes prayer and singing, kneeling with shawls above their heads. They start work at 10am, working until 4pm, with a short break for lunch. The products are sold so that the ladies can earn a living and self esteem.

A private school was built. Fees are £2 per month. Some of the ladies asked if they could learn, as they had not been to school as children. Mrs. Hawksworth sells items made by the women to help pay for their ongoing education.

She was thanked by Mrs. Mary Clark for a very interesting and informative talk.