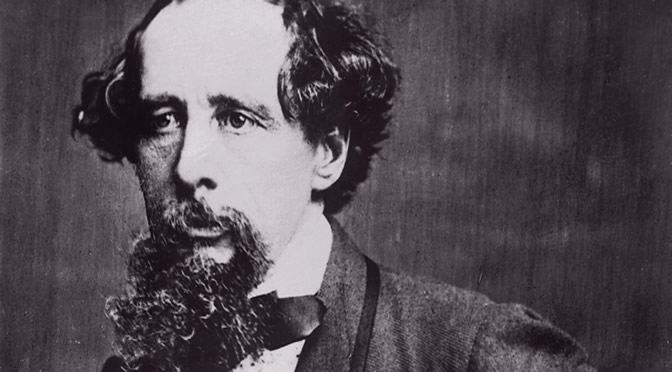 Despite appalling weather, with stormy winds and rain, a large gathering of members turned up for the November meeting, which was a return visit of speakers Gordon and Veronica Walker. Their chosen topic was ‘Humour in Dickens’, with Mr. & Mrs. Walker splendidly attired in Victorian costume.

Both Mr. & Mrs. Walker are extremely knowledgeable about the life and work of Dickens and began by explaining how some of his books were written initially in instalment form, for publication in weekly, or monthly magazines. This often meant that the finished books were lengthy.

Oliver Twist was one such book. It started to be written in 1837. Dickens portrayed characters of authority who had basically no idea of poverty, its causes, or its proper treatment, and who were not appointed because of sympathy to the poor.

Gordon and Veronica read an excerpt from ‘Oliver Twist’, where Mr. Bumble, the Beadle, is paying court to the Matron, Mrs. Corney. Great humour was shown in the way Mr. Bumble was assessing the allowances given to the Matron; candles, fuel, and free accommodation, rather than looking at the suitability of her person, or flattering her.

Dickens also emphasised the difference in status of poor boys like Oliver, who was born in the workhouse, and Noah, who was a ‘charity boy’ employed by Mr. Sowerberry, the undertaker, but considered to be superior to a workhouse boy.

One book written especially for Christmas, was ‘A Christmas Carol’. This was to earn much needed money to support the large Dickens family. It proved to be extremely popular, so Dickens wrote other Christmas books, such as ‘The Chimes’, but these did not reach the same popularity, or have the the enduring appeal of ‘A Christmas Carol’.

In Dickens’ day there was a lot of misunderstanding about boarding schools, especially in Yorkshire. Many boys, second sons, were sent to be educated away from home. ‘Nicholas Nickleby’ was written to illustrate how badly boys were treated, how inferior was their education and the unsuitability of ‘Whackford Squeers’ as he headmaster of ‘Dothe Boys Hall’. After the publication of the book, laws were introduced to improve general educational standards, both of the condition of the buildings and teaching staff.

Mr. & Mrs. Walker concluded their talk by reading a poem by Thomas Hardy – ‘Dr. Marigold’, meant to convey how politicians told their constituents what they wanted to hear, both in Victorian times and the present day. They then read the ending of ‘A Christmas Carol’, with Scrooge having learned the error of his ways, being reconciled with his nephew and becoming a more generous employer to Bob Cratchit.

They were thanked for their inspirational talk and readings by Joyce Johnson.