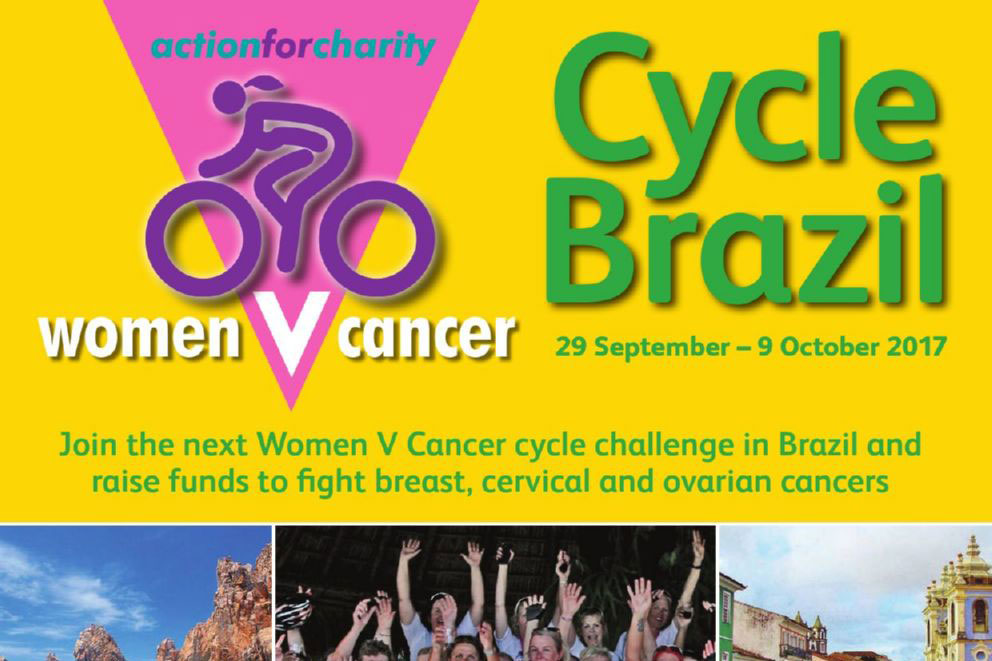 At the April meeting our MU member Frances Branton gave an inspirational presentation of her Brazilian cycle ride, which raised a total of £503,004 for Breast Cancer Care, Jo’s Cervical Cancer Trust and Ovarian Cancer Action.

In October 2016 Frances received an email asking recipients to take up the challenge of fundraising in Brazil. This prompted her husband Karl to voice his concerns about her safety on such an adventure! But Frances was undeterred, and duly sent off her £250 registration fee and the journey began.

The training plan and diet to get fit enough to be able to take on the challenge of cycling 218 miles (350 km) in a mere five days started in January, while she simultaneously had to raise £3,700 to be paid three months before departure; this went towards air fare, accommodation and expenses, plus a portion to each of the charities. She was amazed and grateful for the financial support she received from all her sponsors, including local businesses.

Although she tried, Frances could not find anyone like-minded enough to take on the challenge with her, so on the 26th of September 2017 she joined 159 women she’d never met before, from across the country, with ages ranging from 18 to 74. She saw this as a great opportunity to meet a variety of new people with a common goal, when they arrived at London Heathrow for their flight to Portugal and then on to Salvador.

The group was split into two and Frances’ group raised an amazing £250,000. She shared a room with a lady called Diane, who worked in child and adult mental health, and who’d had a hip replacement, but was still determined to do it! Apparently they got on far too well, as there were complaints that someone had been making too much noise!

Everything was well organised with a good support team, and the daily itinerary was very strict. Time schedules had to be adhered to because it started to get dark around 4pm, however they were all given enough time to familiarise themselves with the new mountain bikes they’d been given for the challenge. Fitness and stamina were tested to the limit as everyone learned to cope with the hot, humid climate and the hilly terrain. The daily temperature was between 20 and 30 degrees, which Frances said felt like an electric heater was burning her face at times.

There were some amusing stories but also some brave and inspiring ones, particularly of the lady who’d taken her mother’s place after she lost her battle with breast cancer.

Frances kept in touch daily with her family and was warmly welcomed home with cake, flowers and Prosecco.