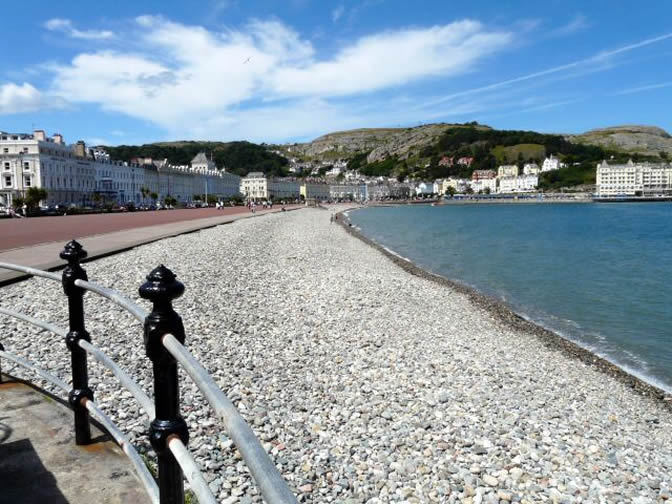 The day out began when two separate groups of ladies converged on Laurel Street. “Where are you going?” each group asked the other. “Haworth and Saltaire”, was one reply, “Bettws y Coed and Llandudno”, was the other, so the parties waited on opposite sides of the street for their coaches to arrive – which they did promptly.
The Mothers’ Union group was comprised of forty ladies and three brave gentlemen – all looking forward to a pleasant excursion to the seaside!

It was a very pleasant drive, firstly by motorway, then onto very picturesque narrow roads through North Wales. The weather, which had been fine and sunny, with some cloud at the outset, improved as the coach neared its first destination, driving through a bustling colourful market at Pen y Gent. The scenery was everything expected of Wales, with steep wooded hills and exposed crags at the tops, narrow valleys with rushing streams. Everyone gasped at the first sighting of the sea, beautifully rippled, the waves dappled in the sunlight, and, in the distance a huge, offshore, wind farm.
Farmers were making hay in what had previously been wet meadows and sheep grazed in fields already mown.

Arriving at Bettws y Coed all disembarked to look in the attractive shops, catering for tourists and residents’ needs, before seeking eating out places. Many found what they were needed in an ecological restaurant, festooned with gorillas of the model and cuddly type, while sitting comfortably on easy chairs and watching the miniature trains go by.

Afterwards the short journey to Llandudno saw everyone split into smaller groups to pursue their own interests. Some walked the length of the promenade; others shopped, finding new and different venues; some sat on the promenade benches, watching the world go by in glorious sunshine; children paddling in the sea, making castles in the sand, parents in deck chairs; the adventurous having boat trips across the bay; children and adults alike laughing at ‘Codman’s Punch & Judy Show’.

Eventually the group convened at ‘Queen’s Hotel’ for the afternoon tea arranged by Isobel. What a sumptuous feast was set out in a lovely reception room – succulent sandwiches, delicious scones, with huge amounts of cream and jam, and plates of tempting cakes, more than enough for even the greediest!

Walking back to the coach for the return journey it was agreed that it had been a wonderful day. Marion thanked the driver, Isobel for arranging the tea and especially Elsie, who had arranged the trip. It was a lovely drive back, arriving in Tottington to a glorious sunset, with Peel Tower and Holcombe Hill silhouetted against it.
As Mr. Punch said earlier, “That’s the way to do it!!”